Despite its small size Sri Lanka boasts of one of the highest rates of biological endemism in the world whether in plants or animals and is included among the top five biodiversity hotspots in the world.

Meanwhile the ocean around Sri Lanka is home to large families of cetaceans including the mighty blue whales, sperm whales and lively dolphins. Altogether 26 species of cetaceans rule the waters surrounding the country, making it one of the best locations for whale and dolphin watching.

Despite the mighty elephants and rare amphibians found in the country birds are the glory of the Sri Lanka’s wildlife. Boasting nearly 433 bird species of which 233 are resident Sri Lanka holds 20 endemic species while another 80 species have developed distinct Sri Lankan races, compared to their cousins in Indian mainland.

Wildlife of Sri Lanka includes its flora and fauna and their natural habitats. Sri Lanka has one of the highest rates of biological endemism (16% of the fauna and 23% of flowering plants are endemic) in the world even though it is relatively small. 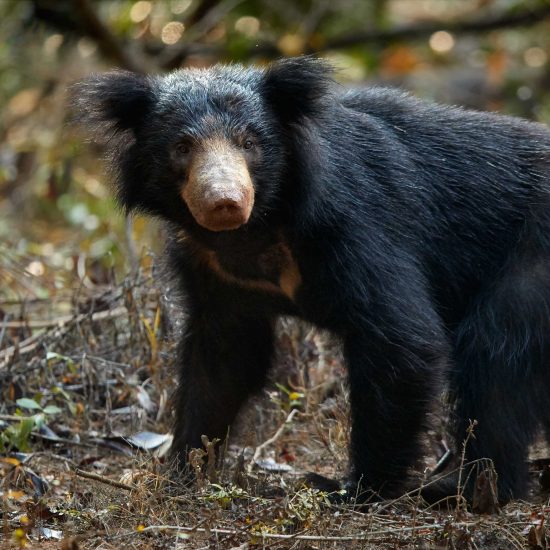 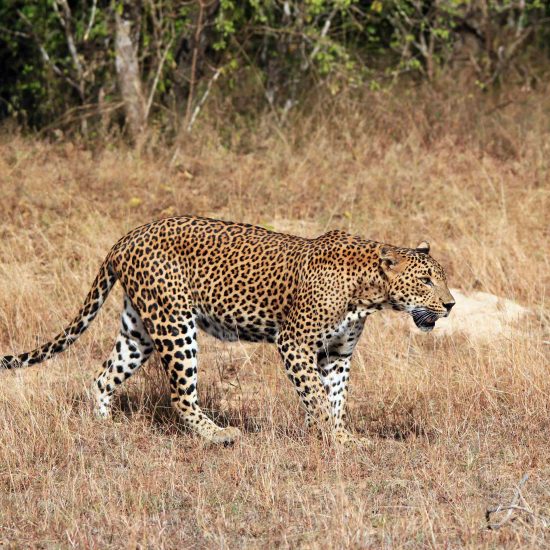 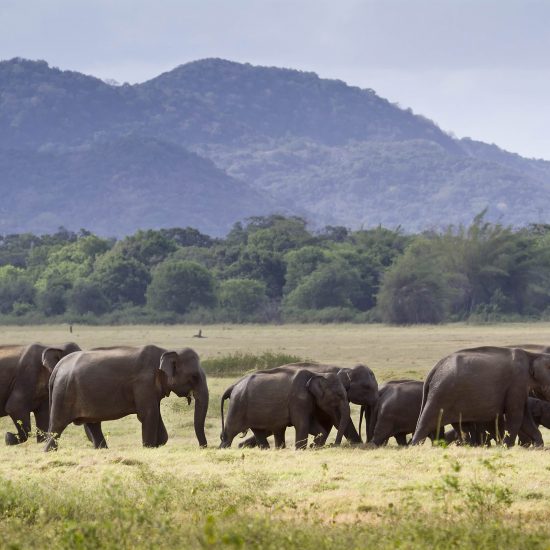 Meet & greet at the Airport by KARUSAN TRAVELS representative. Transfer to Hotel in Kalpitiya for two nights. Rest & relaxation.

Kalpitiya is located in Puttalam district, North Western province of Sri Lanka. It is known for its natural environment. It consists of 14 islands

Early morning kick off to search for Whales off Kalpitiya Shore. About 2 miles further out the continental shelf where it breaks steeply into the deep ocean owing to the seas off Kalpitiya joining with the deep currents and the rich with preferred habitat for whales. Blue whale, sperm whale and occasionally grey whale – (the largest mammals which have ever lived in this planet) can be spotted between Octobers to April.

Afternoon and evening free to explore around Kalpitiya.  If you are a serious bird watching lover Kalpitiya lagoon is the perfect place for you. This tour will take you on an exciting adventure exploring the Kalpitiya lagoon by boat. Learn about the history of Kalpitiya and its wildlife.

Visit the Kalpitiya Fort which was built in 17th century.

Kalpitiya is very popular places for Kite surfing in Sri Lanka. If you're keen on kite-surfing is one of the coolest ways to indulge yourself in Sri Lanka

Morning the second session of whale watching off Kalpitiya. Afternoon proceed to Anuradhapura, for two nights. Discover the first capital of old Ceylon.

Morning proceed to Wilpattu. A unique feature of this park is the high density of "Willus" (Natural lakes) it has and the name has been derived based on this fact. The park is located 30 km west Anuradhapura and located 26 km north of Puttalam (approximately 180 km north of Colombo). The park is 131,693 hectares and ranges from 0 to 152 meters above sea level. Wilpattu is among the top national parks world renowned for its Leopard (Panthera pardus kotiya) population. Mammals that are identified as threatened species living within the Wilpattu National Park are the elephant (Elephas maximus), Sloth bear (Melursus ursinus), leopard (Panthera pardus kotiya) and water Buffalo (Bubalus bubalis). Sambhur, spotted deer, mongoose, mouse and shrew are more of Wilpattu's residents. Afternoon at leisure or continue to visit Anuradhapura city and ancient ruins.

Visit the Sri Lanka’s second ancient capital Polonnaruwa. Polonnaruwa was first declared the capital city with full of ancient archeological monuments. Visit the Minneriya National park by jeeps. The “Gathering of Elephants” in Minneriya National Park has been rated as a wildlife spectacle by Lonley Planet which happens from May to October.

Proceed Kandy and en-route climb the Sigiriya Rock Fortress. Sigiriya known as the marvel at the remarkable engineering of 5th Century and the history of Sigiriya dates back to over 5000 years, to the Mesolithic period. One of Sri Lanka’s major attractions and a World Heritage Site, Sigiriya (Lion's Rock) cam e into prominence in the 5th century AD, when the patricide King Kasyapa, afraid of reprisals led by his half - brother, Mogolan, chose to move the seat of power from Anuradhapura to this 500m rock.

Proceed to Kandy. Evening visit the last kingdom of Sri Lanka, Kandy and the Kandy Temple. Kandy’s main attraction, the ancient castle which houses the Sacred Tooth Relic of the Buddha. The Dalada Maligawa itself is a magnificent shrine, with decorative walls, moat, turrets, golden roof and fine wood-work and its 16th – 19th century ambiance vividly alive. Three religious services (pooja) with traditional music, held daily at dawn, mid-day and in the evening, can be viewed by visitors.

After the breakfast leave for the “Little England” Nuwara Eliya through scenic tea plantations. Proceed to Nuwara Eliya for one night.

Early morning drive to Horton Plains. This is a protected area in the central highlands of Sri Lanka and is covered by montage grassland, cloud forest and many endemic woody plants. This plateau at an altitude of 2,100–2,300 meters is rich in biodiversity and many species found here are endemic to the region. This region was designated a national park in 1988. It is also a popular tourist destination and is situated 32 kilometers from Nuwara Eliya. The Horton Plains are the headwaters of three major Sri Lankan rivers, the Mahaweli, Kelani, and Walawe. Large herds of Sri Lankan Sambar Deer feature as typical mammals, and the park is also an Important Bird Area with many species not only endemic to Sri Lanka but restricted to the Horton Plains.

After the breakfast proceed to Yala. Rest & Relaxation.  Afternoon safari at Yala National Park. This the most visited and second largest national park in Sri Lanka. It is situated in the southeast region of the country, and the park covers 979 square kilometres. The parks owns the highest density of lapboards in Asia. Yala harbors 215 bird species including six endemic species of Sri Lanka. The number of mammals that has been recorded from the park is 44, and it has one of the highest leopard densities in the world.

Breakfast at Hotel. Full day safari in Yala National Park. Yala national park gives the best opportunity to witness Sri Lanka’s board variety of wildlife and it is an internationally-renowned wildlife park, has attracted a large number of international and national visitors annually.

Breakfast at Hotel. Look for Blue Whales off Mirissa.  Mirissa situated in the southern coast of Sri Lanka is the closest point to the continental shelf and on the migratory route of Whales as they move closer to the warm waters of the Indian Ocean, primarily to breed. Weligama has become a hotspot for Blue Whales.

Visit Galle city and the fort.

Transfer to the International Airport for Departure. 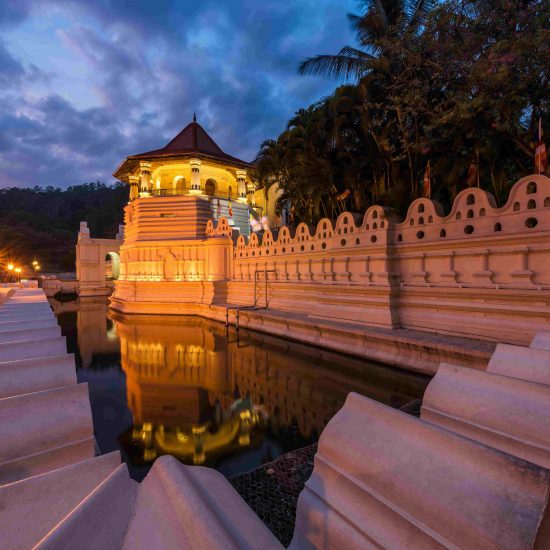 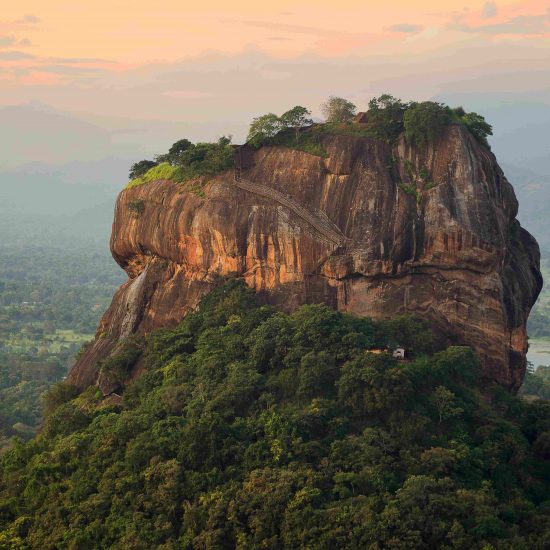 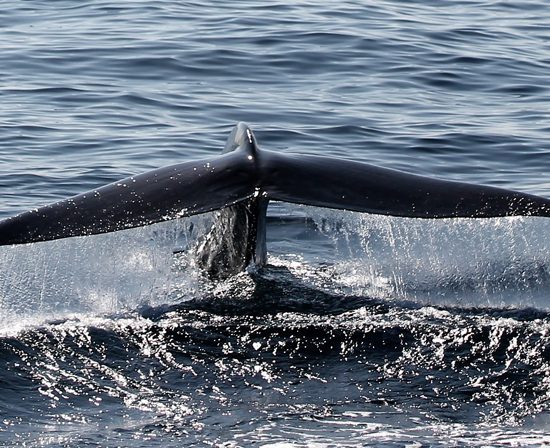